Connected car features can range from general Internet services, entertainment and social platforms, to smart mobility services that leverage data. Moreover, some aspects of the connected car are already a reality – with 4G networks powering navigation devices, traffic alerts and streaming to entertainment systems. But how will that shape the next generation driving experience? Keep reading to find out! 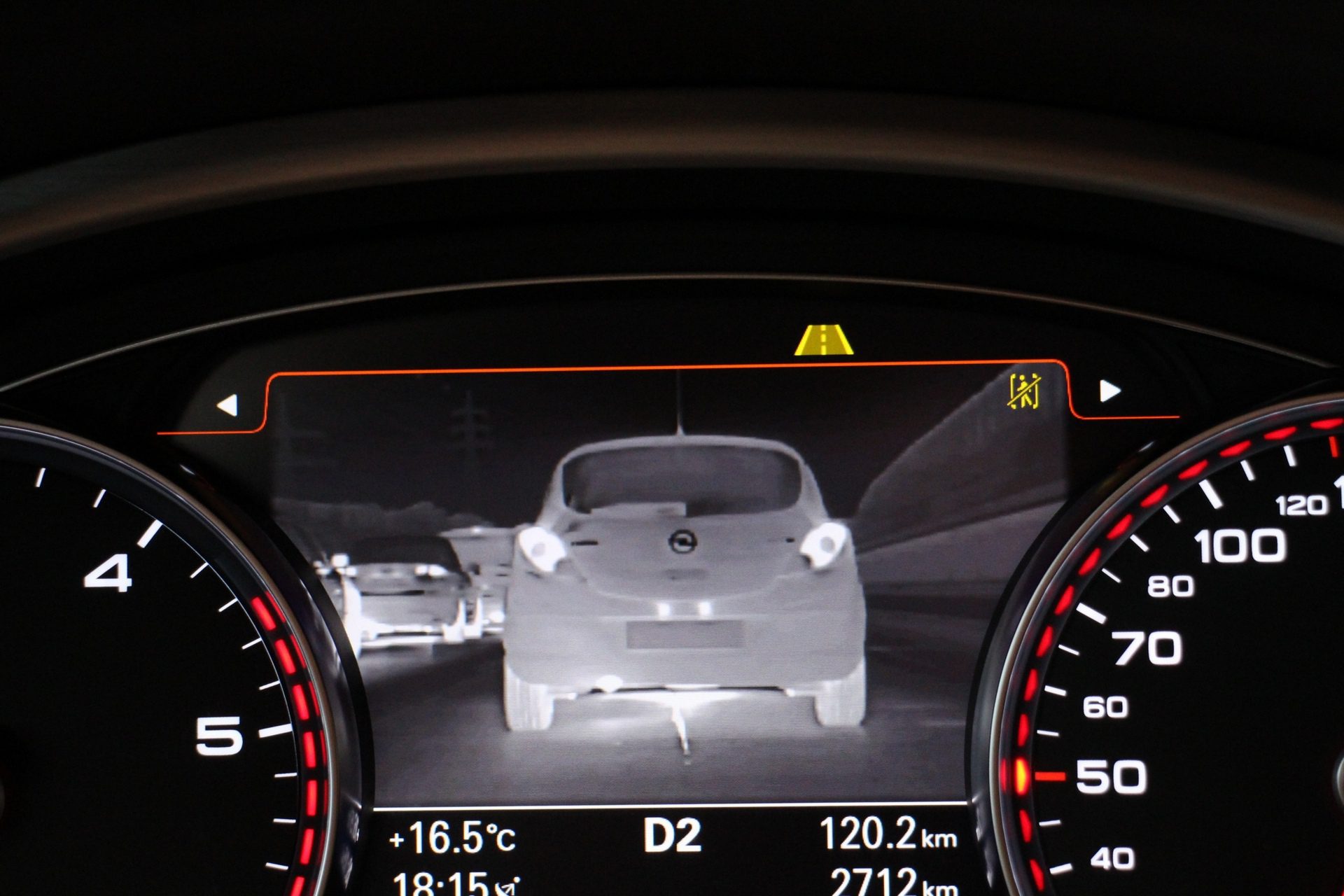 Adaptive headlights use motors that work in sync with the steering to point the headlights in the direction you are pointing the car thus illuminating the road ahead, even around curves. This helps drivers see where they are going on cloverleafs and other curves, but cannot help you see around corners.

Night vision systems use far-infrared (FIR) cameras and special software to recognize the heat signatures of pedestrians, cyclists and animals. Nearby threats are usually highlighted in yellow, but warnings of impending collisions generally appear in a head-up display along with a bell or chime. Infrared cameras have had great success so far as they can succeed where lidar fails, such as in heavy rain and snow.

Proximity alerts can be helpful, especially in vehicles where it’s not possible to see the front bumper (like in many sports cars and SUVs). If a vehicle has parking assist or collision avoidance, the ultrasonic and camera sensors for proximity warnings are already in place. As you approach another vehicle or object in front or back, an audible bell usually sounds, sometimes accompanied by a flashing animation in the dashboard’s center screen warning that the car is too close to an obstacle.

Lane-departure warning systems are common (a camera that scans ahead of the car looking for lines on the road), but their effectiveness is questionable. There are many different implementations. Some warning systems use chimes, or vibrate the steering wheel or even vibrate one edge of the driver’s seat, depending on which line has been crossed. However, they alone do not reduce accidents, insurance claims or the number of related injuries. According to researchers, many drivers become injured due to the alerts, so these systems work better in conjunction with auto-braking or collision-prevention packages.

Lane centering/lane keeping systems use the information from the camera system to actively correct the steering rather than just warning drivers that they are straying from their lane. The effect can be subtle or distracting, depending on the driver’s abilities and the car itself. However, bear in mind that it can be aggressive, jerking the wheel to let the driver know he is straying; in some implementations, it also steers the car down the center of the lane on its own.

The Mercedes-Benz Attention Assist feature asks if you need a break if you drift over the lines enough times. If you are accustomed to hugging the yellow line, for example, you may find you are constantly fighting with a lane-centering system. On the other hand, when coupled with lane-departure warnings, it can alert a drowsy driver that it’s time to rest.

Cross-traffic alerts aid drivers in backing out of parking spaces and driveways by using a combination of sensors. This feature is particularly effective when the drivers-side view is blocked, such as by a van, fence or snowbank. However, cross-traffic alerts, which may sound a gong or vibrate a seat, work only while the car is moving (slowly) backward. Some systems don’t automatically brake the car, so drivers need to be cautious.

These systems range from pre-crash preparation to full automatic braking and pedestrian avoidance. Using a combination of video cameras, radar and lidar (which uses pulsed laser light to measure distances), a collision-avoidance system pre-tightens seat belts and primes the brakes so that when a driver applies the foot pedal, it takes less pressure to bring the car to a full stop.

Auto-braking systems bring a car to a complete stop without the driver’s intervention and can prevent a collision at speeds below 30mph. At higher speeds, they can reduce the severity of an impact. Auto-braking also includes warning alarms — usually a loud bell and red flashing image on the center display.

There is no standard for how auto-braking systems should work – some being more cautious than others, stopping several feet short to eliminate any margin for error. Nonetheless, these systems are considered to be so effective that they are available as options on vehicles ranging from the Mazda 3 and Subaru Impreza to luxury cars. The advanced way this technology works is something that Tesla has already tested – the car braking instead of the driver!

Collision warning is usually coupled with collision-avoidance and auto-braking systems as the first stage in an overall collision-prevention system. The collision-warning feature uses some of the same technology designed for adaptive cruise control to monitor the distance of vehicles ahead. When the gap between your car and the car ahead narrows too rapidly, a loud alarm sounds, and a red warning light appears on the dash. Some collision-warning systems, such as the one offered in the Mercedes-Benz S-Class, also look for possible impacts from the side.

Pre-collision system primes the brakes for a panic stop and automatically tightens seat belts, while some systems anticipate being hit from behind. Mercedes-Benz’s Pre-Safe Plus system, for example, uses radar in the back of the car to detect an imminent impact.

Pre-Safe collision warnings work by flashing the hazard warning lights to alert another driver who is approaching too quickly from behind. If the approaching driver doesn’t slow down, the car then not only tightens the seatbelts but also automatically holds down the brake if the vehicle is already stationary. The latter feature is intended to minimize the chance of whiplash and help avoid hitting cars ahead of you.

Adaptive cruise control uses radar, and sometimes video-camera sensors, to monitor the distance between your car and the car in front of you. If your vehicle approaches a slower vehicle in the same lane, the system will slow down your car to match the speed of the car you’re following, accelerating and decelerating as needed. The driver can adjust the distance between the vehicles (usually in three settings: close, medium and far).
The head-up display uses small projectors in the dash to reflect icons and basic information in an area of the windshield just within the driver’s line of sight. Speed, turn arrows and even collision warnings can be projected onto the windshield, helping drivers keep their eyes on the road.

Video rear-view mirror (currently available in some Cadillacs), uses a wide-angle video camera in the back that has the advantage of never being obstructed by passengers or the rear roof pillars. The resulting image appears in the windshield-mounted rear-view mirror (like a regular mirror image).

Parking assist or active parking systems can tell drivers whether their car will fit into a space and then perform the parallel-parking maneuvers for them. All the driver has to do is pull alongside the nearest vehicle and push a button, and the car will take over the steering, acceleration and braking to fit the vehicle into place. Although this feature is typically part of a technology package costing thousands, such systems are now available in a wide range of vehicles, from the Chrysler Pacifica minivan to the Toyota Prius.

Some less-advanced systems, such as the one in the Ford Focus, require the driver to control the speed using a foot on the brake. Automatic parking systems that can do the same for perpendicular parking are less common and tend to be overly complicated to use. On the cutting edge are BMW and Tesla systems, which allow you to fit the cars into tight spots using the key fob as a remote control.

As all of these and many more safety features are implemented in connected cars, the overall driving experience is expected to be immensely improved as well. Until and when that happens, we are here for you.

Come to our repair shops in Hamilton today and leave your car in our care!