Unless you’ve been living under a rock for the last couple of years, you must have heard of Mr. Elon Musk. Actually, his name is most often associated with the electric car industry and the private 21st-century space exploration. The launch of Musk’s Tesla Roadster into the Earth’s orbit was hands-down one of the most exciting moments of 2018 and Mr. Musk was elbows deep involved in the preparations for it and the event itself.

More recently, he has been making headlines about moving to Mars and making the staple of his most prominent company – the Tesla Model 3 – more affordable and available widely. Mr. Musk has been called a modern alloy of Thomas Edison, Henry Ford, Howard Hughes and Steve Jobs and is the man behind Tesla, Inc., SpaceX, SolarCIty, Neuralink and PayPal. His companies have sent shockwaves throughout American (and worldwide) business and industry, but it was him who has invested not only the energy, but also his fortune to shape the future of humankind and push its limits to the brink of a Sci-Fi fantasy. 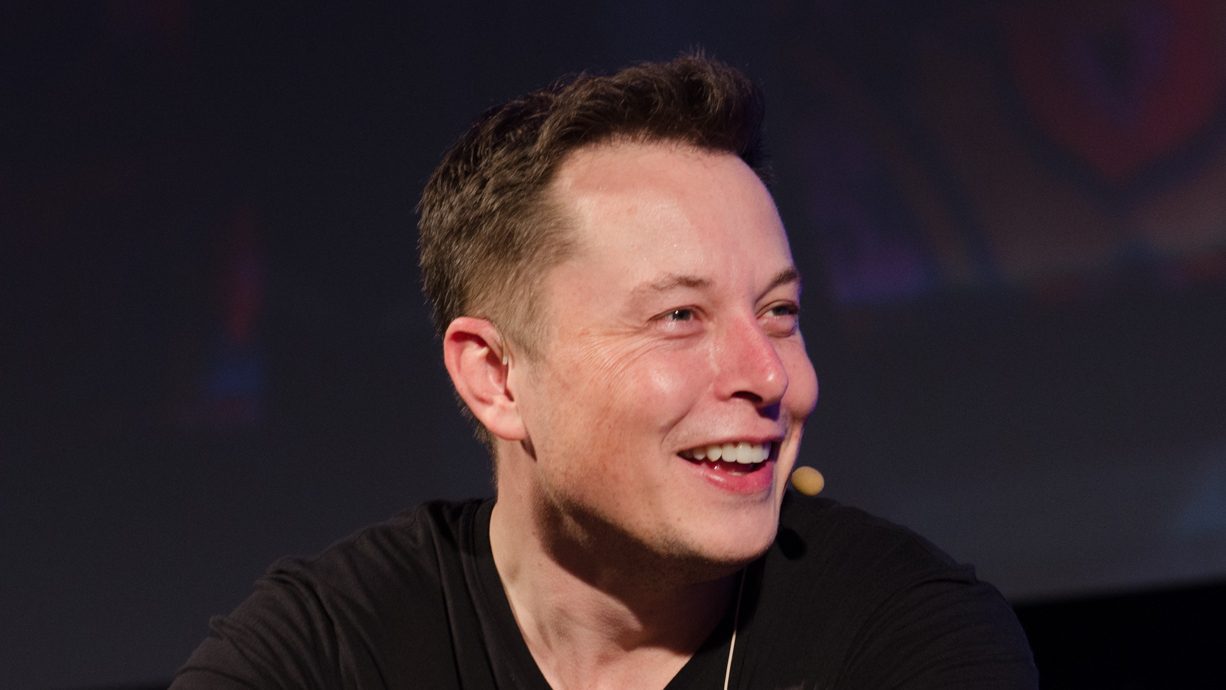 Elon Musk was born on June 28th 1971 and raised in Pretoria, South Africa, but moved to Canada in 1989, at the age of 17, to attend Queen’s University. Afterward, he relocated to the US, where he graduated in economics from the Wharton School (University of Pennsylvania) and physics from the College of Arts and Sciences. He began a Ph.D. in applied physics and material sciences at Stanford University in 1995, but dropped out after 2 days to pursue a career as an entrepreneur.

His first steps in the Silicon Valley consisted of launching and developing companies like Zip2 – providing and licensing online city guide software to newspapers – which was acquired by Compaq for $340 million in 1999 and X.com – an online bank – which merged with Confinity in 2000 and later that year became PayPal, which was bought by eBay for $1.5 billion in October 2002.

Moreover, it seems that 2002 was a significant year in the life of Mr. Musk, as that was when he got the idea of founding SpaceX – Space Exploration Technologies – with the intention of creating a true spacefaring civilization on Mars. His plans are based on the premise that space rockets could be reused, something that had previously not been seen as feasible or even possible by the experts in the industry. Therefore, the company intends to achieve this goal by developing and manufacturing space launch vehicles focusing on advancing the state of rocket technology.

Mr. Musk views space exploration as an important step in preserving and expanding the consciousness of human life and has said that multi-planetary life may serve as a hedge against threats to the survival of the human species.

“An asteroid or a super volcano could destroy us, and we face risks the dinosaurs never saw: an engineered virus, inadvertent creation of a micro black hole, catastrophic global warming or some as-yet-unknown technology could spell the end of us. Humankind evolved over millions of years, but in the last 60 years, atomic weaponry created the potential to extinguish ourselves. Sooner or later, we must expand life beyond this green and blue ball – or go extinct.”

In Ashlee Vance’s biography “Elon Musk: How the Billionaire CEO of SpaceX and Tesla is Shaping our Future“, Mr. Musk stated that he wants to establish a Mars colony by 2040, with a population of 80.000. Moreover, he stated that, since Mars’ atmosphere lacks oxygen, all transportation would have to be electric (electric cars, electric trains, Hyperloop, electric aircraft) – which could account for his urge to get involved in electric vehicle production. 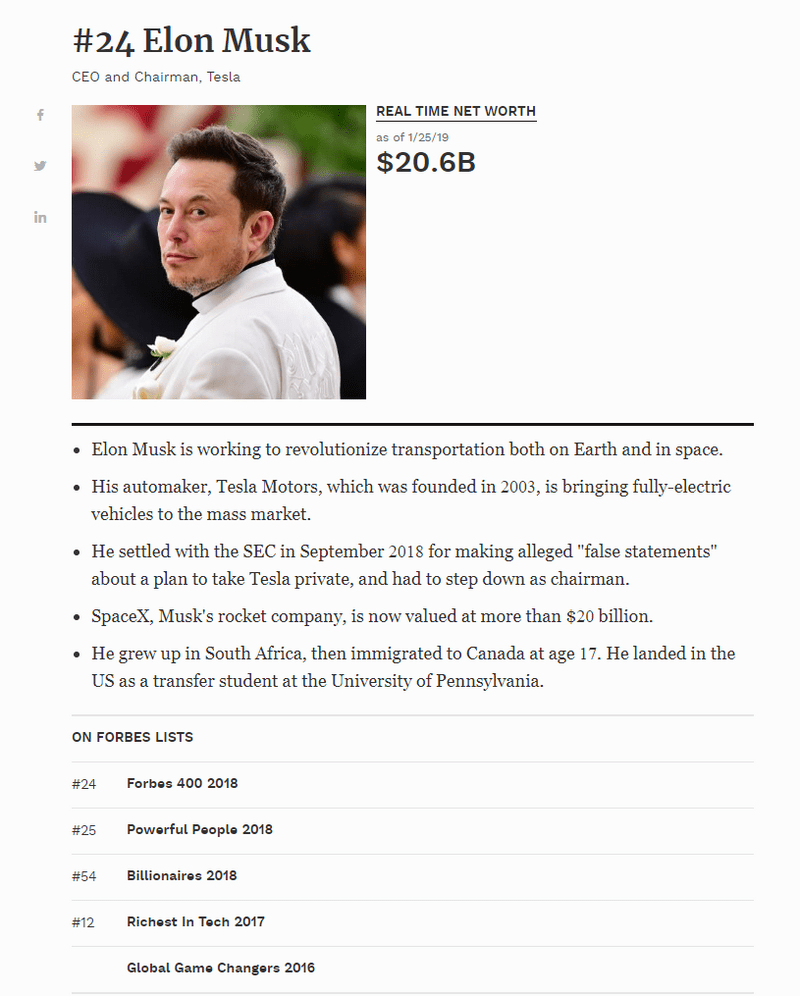 Tesla, Inc. was established in 2003 – Mr. Musk having been one of three founders and overseeing Roadster product design at a detailed level, but not being deeply involved in day-to-day business operations at first. As stated on the company website, Tesla’s mission has been to accelerate the world’s transition to a sustainable energy future. This is why it comes as no surprise to know that Tesla also produces 2 energy storage products, the Powerwall home battery and the Powerpack industrial-scale battery.

In 2016, Tesla became the world’s first vertically-integrated sustainable energy company with the acquisition of SolarCity, the leading provider of solar power systems in the US, and in 2017 released Solar Roof – an affordable energy generation product.

However, all of these endeavors haven’t hindered the development of Tesla’s main product – electric cars. The first significant unveiling was the Roadster, a sports car capable of accelerating from 0 to 100 km in 3.7 seconds and traveling 400.000km between charges of its lithium-ion battery, and it only got better from there. The vehicles coming out of Tesla’s factories have held titles such as Motor Trend 2013 Car of the Year and Consumer Reports’ Best Overall Car – the Model S sedan in particular, while Model X was the first SUV ever to earn 5-star safety ratings in every category and sub-category in the National Highway Traffic Safety Administration’s tests.

On the heels of that kind of success, Tesla, Inc. became the most valuable US car maker (surpassing General Motors) in April 2017, a godsend for Mr. Musk who was looking to increase production and release his next baby – Model 3 sedan – by the year’s end. However, due to numerous delays caused by highly publicized production problems, the Tesla Model 3 only met the goal of producing 5.000 units per week in the second half of 2018. Now, with the new Tesla semi and Roadster 2020 entering production at the beginning of 2019, the new goal for Mr. Musk and Tesla is to reduce costs and improve efficiency.

The reason is simple – Tesla’s cars need to be affordable to the general public if the company is to survive. It was announced mid-January that the carmaker plans to cut around 7% of its workforce in order to get closer to the promised price of $35.000 for Model 3. For now the cheapest Tesla Model 3 available is the mid-range rear-wheel-drive model (starting at $44.000), the long-range all-wheel-drive (starting at $51.000) and the performance model (starting at $63.000). As Mr. Musk put it himself in the email to his workers announcing layoffs, those prices are still too high for most people, thus still keeping sales margins relatively low, but promise lies in the expansion to the European market.

Furthermore, with the increasing demand for electric vehicles – a research company Deloitte estimates that it will peak at 21 million vehicles a year by 2030 – it only solidifies Tesla’s position of leadership on the automotive market. Even though the overwhelming thought is that fossil-fuel vehicles will remain sought after long after electric cars achieve similar prices, the general observation is that car buyers completely commit to electric transportation once they get a chance to try a premium electric vehicle. With Tesla releasing potentially disruptive vehicles like Model Y SUV (the Tesla pickup truck) and the Tesla Semi, the buyers’ acceptance of electric cars as a go-to form of transportation will be even more pronounced.

“There’s no doubt, the auto industry is becoming much more serious about developing electric vehicles driven by the need for emissions compliance in the US, China and Europe,” said Michael Robinet, analyst with IHS Markit. “Tesla has shown the industry that markets do exist for electric vehicles, and the major players have taken notice.”

Cadillac President Steve Carlisle admitted he “obsessively” benchmarks and studies Tesla as “they have done a lot to popularize electric vehicles and to get into the minds of consumers”. Carlisle’s public comments about Tesla should not go unnoticed as auto executives have privately scoffed for years when asked about Mr. Musk and haven’t acknowledged the growing sales and success Tesla’s been enjoying. Now, they may be more willing to admit Tesla’s success, but they also believe their companies can increase the sales of their electric vehicles to rival and even exceed Tesla. Ford CEO Jim Hackett says the electric models it’s developing are “going to appeal to car owners and car lovers” and is thus hesitant to call Tesla the winner of the electric vehicle race.

“I think we ought to wait a while to write the whole story because we don’t know what happens when EVs really start to scale,” he said.

Both executives have a point. In 2018, US consumers bought just over 360.000 electric vehicles, just 2% of all vehicles purchased in the country. In other words, it’s early, but Tesla and Mr. Musk are clearly influencing the thoughts and actions of automakers looking to catch up in the world of electric cars and are actively redefining the entire industry. For all we know, mass production and use of electric vehicles may be just the first step in forming the mindset and coming up with the technology needed to relocate the human race to Mars someday and carry out Mr. Musk’s “save the world” mission.

We here at CRS Automotive are excited for the bright future up ahead.

Smart Cities: What's the Progress Status?
Internet of Things: The Link Between Smart Cars and Smart Cities
Are Cars with Biometric Sensors the Future?
How Often Do You Change Your Car Air Filter?