On May 20th, 2019, Niki Lauda, a three-time Formula 1 world champion, had passed away peacefully in his sleep in a hospital in Zurich, surrounded by family members. At that moment, the world was left without a man who gave so much to the racing sport, who revolutionized it and brought so much joy to the fans. We will always remember his bravery, his level-headedness and perseverance. Here is why. 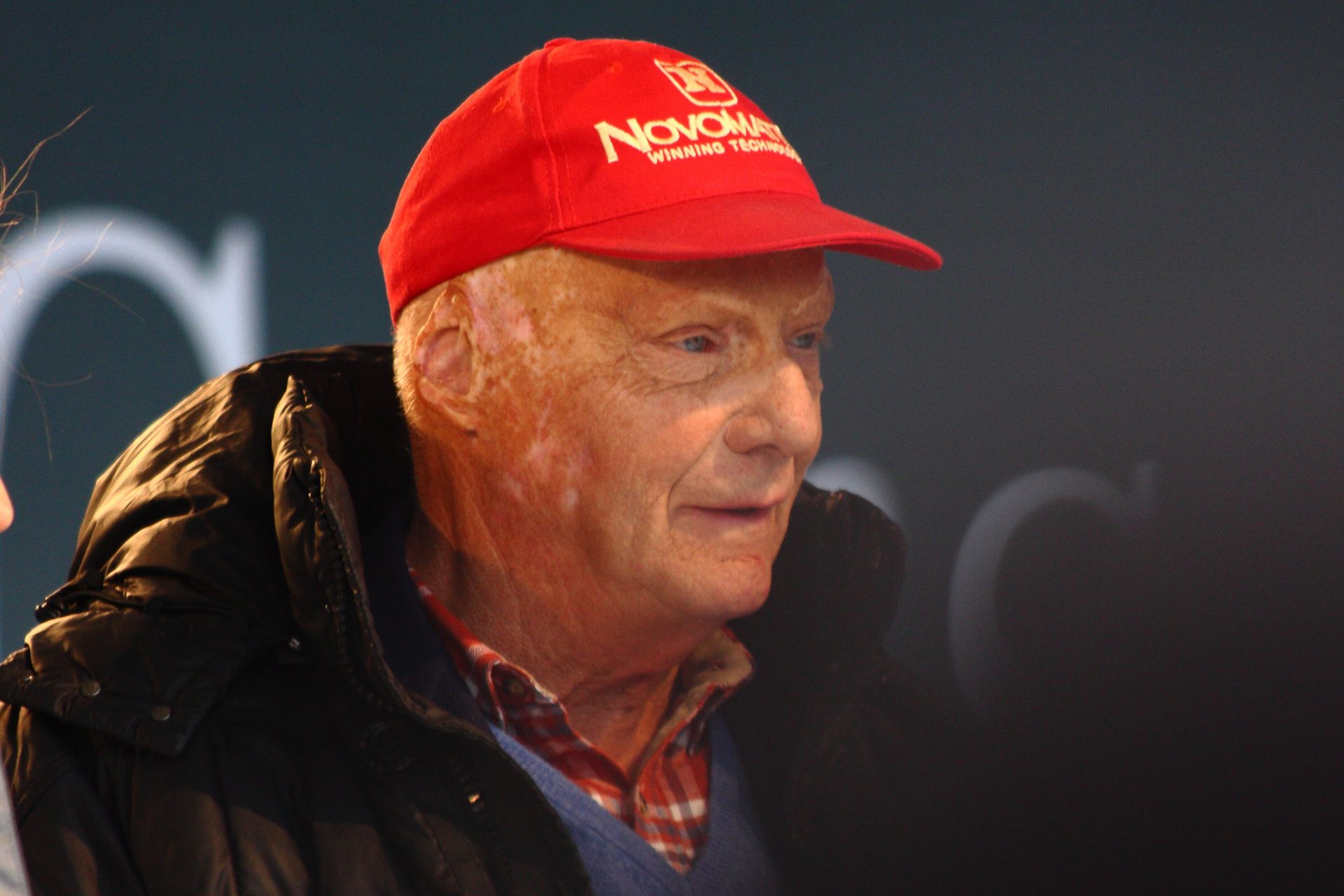 Andreas Nikolaus Lauda was born on February 22nd, 1949 in Vienna, Austria to a wealthy paper manufacturing family, that objected to his becoming a racecar driver. He started out with a Mini, moved into Formula Vee and shortly after that began driving private Porsche and Chevron sports cars. With his career stalling, he took out a £30,000 bank loan, secured by a life insurance policy, to buy his way into the fledgling March team as a Formula 2 (F2) driver in 1971. His family’s continued disapproval and an ongoing feud with them over his racing ambitions caused him to abandon further contact.

Mr. Lauda was quickly promoted to the F1 team, but drove for March in F1 and F2 in 1972. Although the F2 cars were good (and Lauda’s driving skills impressed March principal Robin Herd), March’s 1972 F1 season was catastrophic. Perhaps the lowest point of the team’s season came at the Canadian Grand Prix at Mosport Park, where both March cars were disqualified within 3 laps of each other after just past 3/4 race distance. Mr. Lauda took out another bank loan to buy his way into the BRM team in 1973. He was instantly quick, but the team was in decline; his big break came when his BRM teammate Clay Regazzoni left to rejoin Ferrari in 1974 and team owner Enzo Ferrari asked him what he thought of Lauda. Regazzoni spoke so favorably of Lauda that Ferrari promptly signed him, paying him enough to clear his debts. Suffice it to say, the legend was born shortly thereafter. 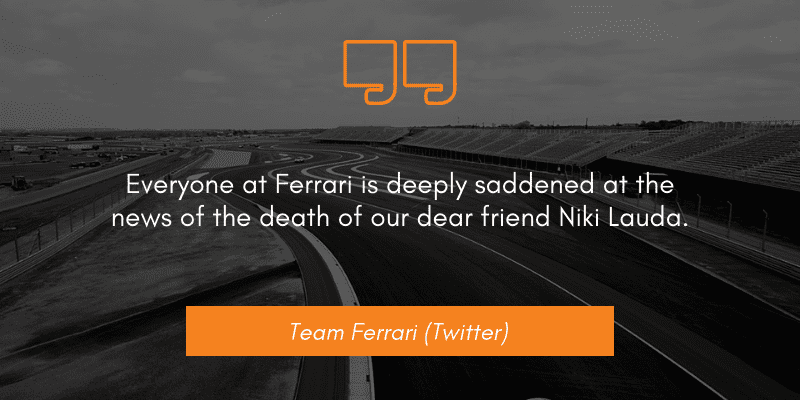 He won his first World Championship in 1975 with Ferrari, but the following year was the one that marked his professional and personal life forever. Before the 1976 German Grand Prix at the Nürburgring, Lauda was in the lead of the championship with twice as many points than his two closest challengers Jody Scheckter and James Hunt, so everyone expected him to raise the trophy for the second year in a row. However, his concerns about the (un)safety of the track (lack of fire marshals, fire and safety equipment and safety vehicles) fell on deaf ears and the race was held on August 1, 1976, despite his call to fellow drivers to boycott it. 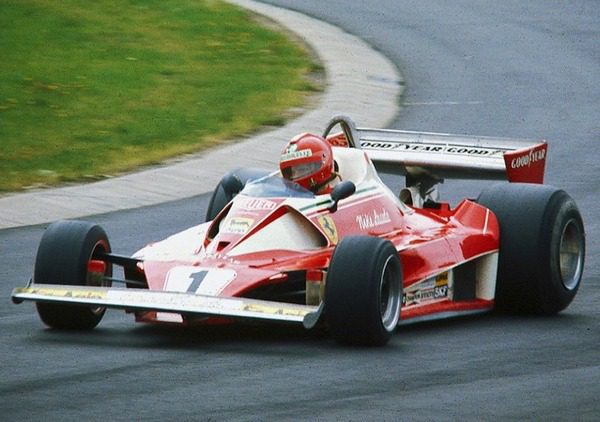 During the second lap at the very fast left kink before Bergwerk, Lauda’s Ferrari 312T2 swerved off the track, hit an embankment, burst into flames and made contact with Brett Lunger’s Surtees-Ford car. Unlike Lunger, Lauda was trapped in the wreckage. Several drivers arrived at the scene a few moments later, but before he was pulled from his car, Lauda suffered severe burns to his head and inhaled hot toxic gases that damaged his lungs and blood. As Lauda was wearing a modified helmet because it didn’t fit him properly, the foam had compressed and it slid off his head after the accident, leaving his face exposed to the fire. Although Lauda was conscious and able to stand immediately after the accident, he later lapsed into a coma. He was given the last rites in the hospital. 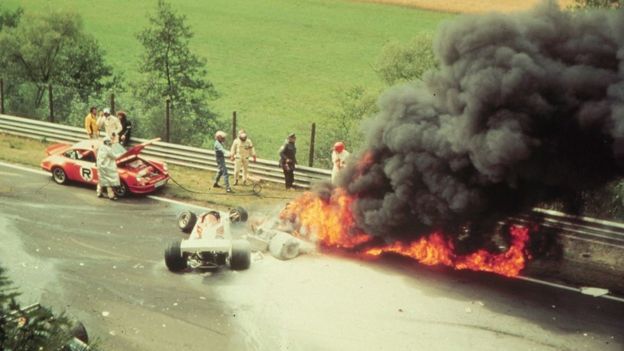 Although he suffered severe burn injuries on his head and hand, a mostly-missing right ear, concussion, broken clavicle and other fractures, lungs filled with toxic gasses and had reconstructive surgery done to allow his eyelids to function properly, Lauda missed only two races before making his comeback at the Italian GP in Monza 6 weeks later where he finished fourth. He lost the championship title to Hunt that year by a single point, but his withdrawal from horrendously wet-race conditions in the Japan finale showed that Mr. Lauda believed his life to be more important than just another championship win after all he had been through over the season. 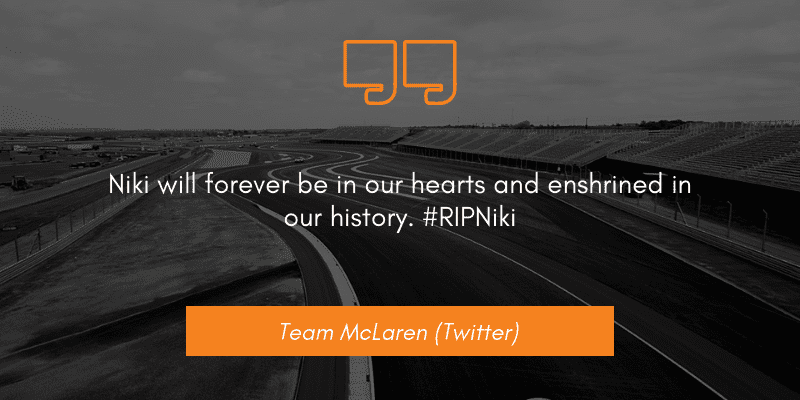 It also showed that he was a survivor who wasn’t ready to give up. He went on to win 2 more championship titles – in 1977 with Ferrari again and 1984 with McLaren – before finally retiring in 1985. Even though he wanted to concentrate on his other business ventures – he owned and managed 3 airline companies (LaudaAir, Niki and LaudaMotion, respectively), he never completely left the racing world when he did the ring. In the following years, he occupied different managerial roles with Ferrari, Jaguar and Mercedes, respectively, and formed a close bond with Lewis Hamilton who he helped bring on to Mercedes and often supported and counseled. He was inducted into the International Motorsports Hall of Fame in 1993 and commented on the races for TV broadcasts from 1996 onwards. 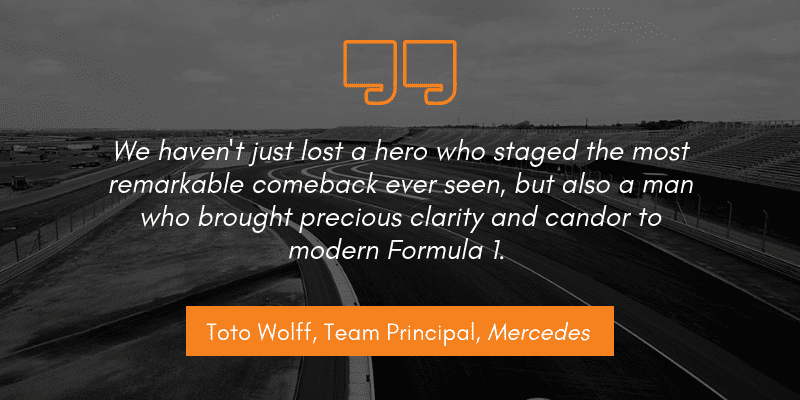 His passion for the sport of Formula 1 driving was always evident to those around Mr. Lauda, whether he was behind the wheel, researching technology, or calling strategy from the side of the track. Acclaimed not only for his incredible racing skills but also his methodical approach to the mechanics of driving, Lauda earned himself the esteemed nickname “The Computer Brain” by the press after previously having been dubbed “The Rat” because of his teeth. He was constantly refining his technique, in a time when many of his contemporaries took a more ‘no-guts-no-glory’ approach on the racetrack.

Niki Lauda didn’t lack courage. He was fearless, exhibiting unwavering competitiveness on and off of the track. In fact, Lauda’s sheer determination to win led him to what many consider to be the greatest comeback in motorsports history after the 1976 crash. Many members of the racing community (especially team members) looked up to Lauda and regarded him as a mentor and friend, including former driver Michael Schumacher and current Formula One World Champion Lewis Hamilton.

People who new Mr. Lauda personally describe him as humble, practical, matter-of-fact and straightforward. There was no arrogance about him. He was warm, friendly, direct and wickedly funny, his humor often directed at himself or at puncturing some of the pomposity that can sometimes infect Formula 1. 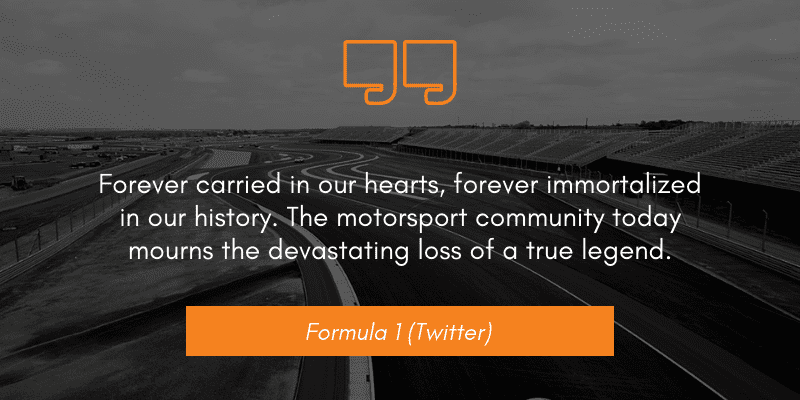 “We haven’t just lost a hero who staged the most remarkable comeback ever seen, but also a man who brought precious clarity and candor to modern Formula 1,” Mercedes team principal Toto Wolff said.

Niki Lauda simply said it as it was, often in salty language. He was a man of integrity and he was respected as much for his character as for his achievements – and it reflected in the community after he passed away.

“His unique successes as a sportsman and entrepreneur are and remain unforgettable,” the family statement said. “His tireless drive, his straightforwardness and his courage remain an example and standard for us all. Away from the public gaze he was a loving and caring husband, father and grandfather. We will miss him very much.”