For a while back, we’ve been seeing the ever so slight shift within the automotive industry – from fossil-fuel vehicles to the electric ones. The first and most obvious reason for this is humanity’s attempt to reduce its carbon footprint and preserve the environment. The second and third are that electric vehicles are easier to maintain and electric charging is cheaper. However, there is one more thing to consider here. Apparently, electric cars have significantly higher energy efficiency than cars with ICE engines. Let’s examine. 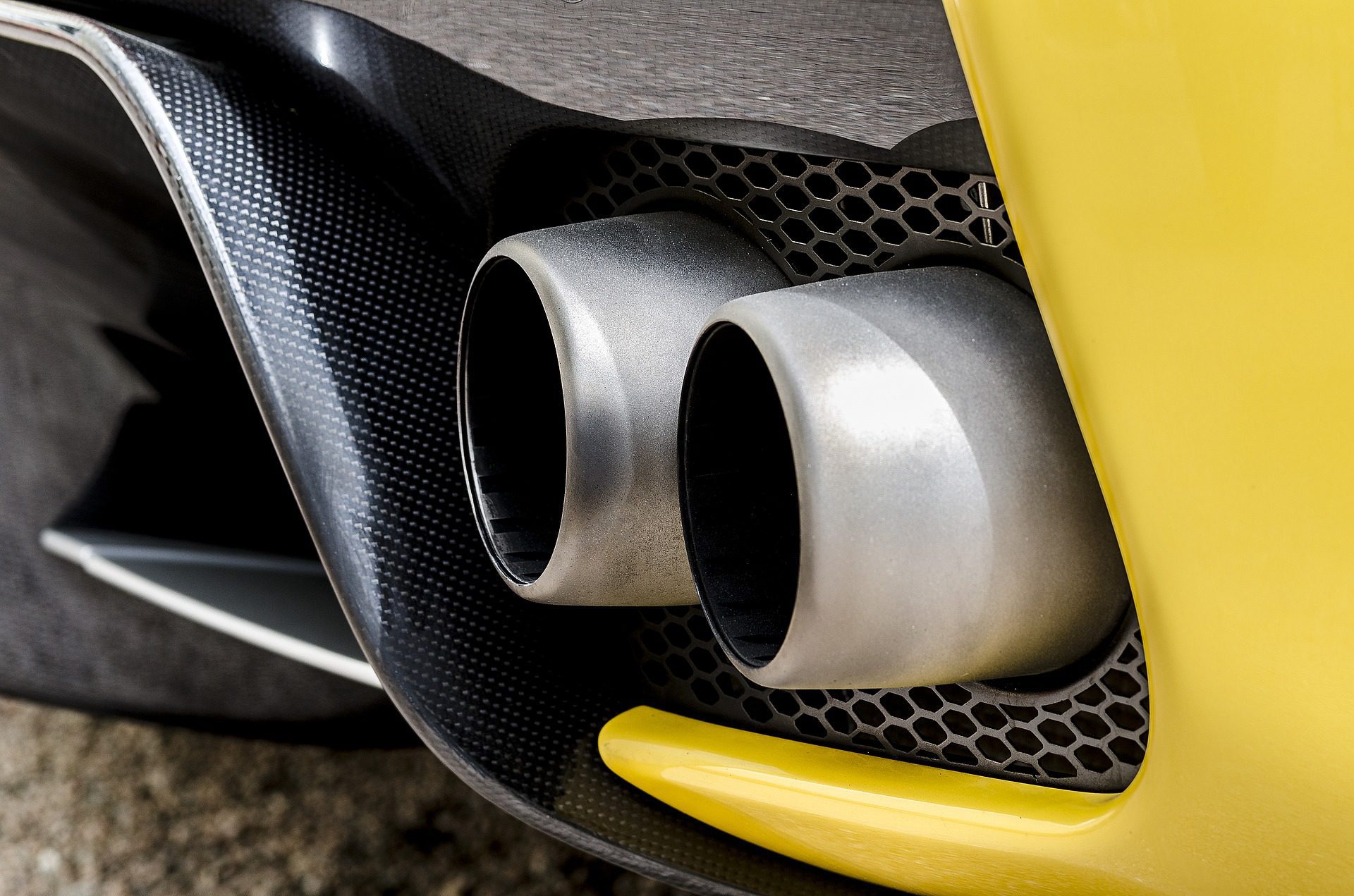 According to a study by the US Department of Energy (DoE), the energy efficiency of battery electric vehicles (BEVs) is 60-82%. Plainly said, out of 100% of energy invested, the vehicle uses around 80% to turn it into movement. The rest of the energy is lost during charging (around 16%) or used for auxiliary purposes.

This high percentage of utilization of the electric propulsion system is achieved, among other things, thanks to the regenerative braking, i.e., the return of the work of energy loss to the batteries. On its own, it improves efficiency by 17%: 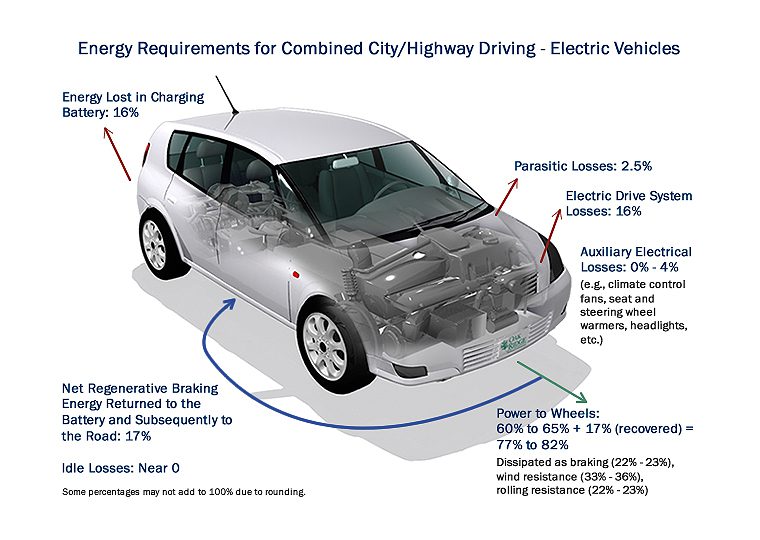 “Unlike conventionally fueled vehicles, electric vehicles experience a loss of energy during “refueling,” with an energy loss of about 16% from the wall power to the battery during charging. However, electric vehicles are otherwise highly efficient delivering 60%-65% of the energy from the wall power to the road even before energy is reclaimed through regenerative braking. When energy gains from regenerative braking are included, the amount of energy used for traveling down the road can rise to more than 80% in the EPA-combined city and highway driving cycle”, DoE states.

However, when it comes to the efficiency of ICE engine cars, it’s the opposite – the majority of energy put into the tank is being lost. Only 12-30% of the energy put into an ICE car is used to move the car down the road, while the rest of the energy is lost to engine inefficiencies (around 70%) or used to power accessories. 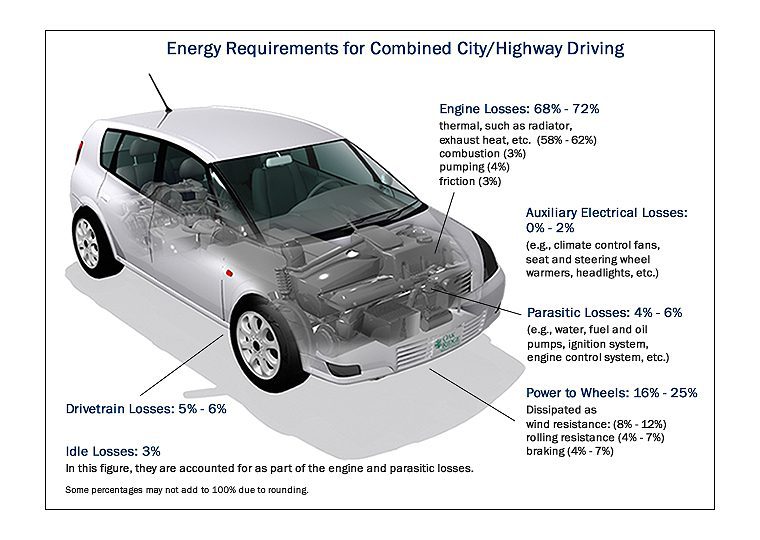 “Not all of the fuel that is put into a car’s fuel tank is used to move the car down the road. In fact, only 12-30% of the energy put into a conventional car is used for that purpose. The rest of the energy is lost to engine inefficiencies (68-72%) or used to power accessories. The amount of energy loss varies depending on the type of driving – city, highway, or combined city and highway. The engine losses, such as exhaust heat and pumping, are higher for city driving than for highway driving. There are no idle losses in highway driving, but losses due to wind resistance and rolling resistance are higher for highway driving than city driving. All in all, there is great potential to improve vehicle fuel efficiencies with advanced technologies, such as advanced engines and hybridization, that address these losses,” states DoE. 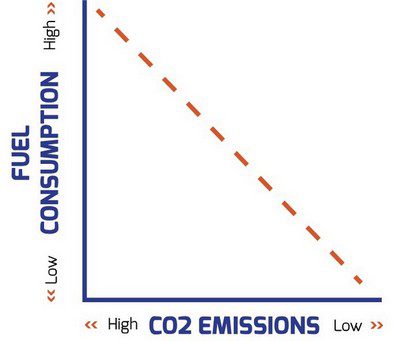 There is one more thing to consider here – the amount of CO2 a car emits is directly related to the amount of fuel it consumes. For instance, a diesel car emitting 95g CO2 per kilometer consumes around 3.7 liters of fuel per 100km, while a petrol car consumes around 4 liters/100km for the same CO2 emissions.

This is particularly important to know considering the carbon tax that has recently been applied throughout Canada (Ontario included) and which raises the price of fuels with high carbon releases. In order to motivate emitters to decrease emissions, the carbon pollution price starts at $20 per tonne of CO2 and will go up slowly over time so households and industries have time to adjust and adopt less carbon-heavy practices. It is expected to rise each year as the carbon tax increases by $10/tonne until it hits $50 in 2022 – meaning it will more than double in less than 3-years’-time – all with the intention of “protecting the environment and the health of all Canadians”, according to prime minister Trudeau.

Therefore, it stands to reason that it’s in everyone’s best interest to shift to alternative energy sources – both from the environmental and financial standpoint. The math is pretty simple. Fossil fuels are only going to get more expensive, plus the cars themselves are emitting CO2 while being driven. On the other hand, electric cars do not release CO2 into the atmosphere, but they do contribute to carbon emissions during battery production and if the electricity used for charging them is generated from fossil-fueled sources.

“To encourage more Canadians to buy zero-emission vehicles, Budget 2019 proposes to provide $300 million over 3 years, starting in 2019-20, to Transport Canada to introduce a new federal purchase incentive of up to $5,000 for electric battery or hydrogen fuel cell vehicles with a manufacturer’s suggested retail price of less than $45,000. Program details to follow.”

Here are the proposed main points:

1) To expand the network of zero-emission vehicle charging and refueling stations, Budget 2019 proposes to build on previous investments by providing Natural Resources Canada with $130 million over 5 years, starting in 2019-20, to deploy new recharging and refueling stations in workplaces, public parking spots, commercial and multi-unit residential buildings and remote locations.

3) To attract and support new high-quality, job-creating investments in zero-emission vehicle manufacturing in Canada, automotive manufacturers and parts suppliers can access funding through the Strategic Innovation Fund, which was recently provided $800 million in additional funding through the 2018 Fall Economic Statement.

In the meantime, Ottawa has raised that to $55,000 to increase the options a buyer can choose and still receive the rebate, but the price limit means the most popular electric car in Canada – the Tesla Model 3 – is not going to qualify. Among those that do qualify, 9 electric cars and 13 plug-in hybrids are eligible, including the second- and third-most popular electric cars, the Nissan Leaf and the Chevrolet Bolt.

So you see, fellow Canucks, it’s in our near future to go green and there are all sorts of ways to go about it. CRS Automotive can help you when it comes to your car. Come to our repair shops in Hamilton today!

4 Best Apps to Help You Take Care of Your Car
My Auto Shop: Car Maintenance App
What Do the Letters on Car Models Mean?
Smart Cities: What's the Progress Status?